Designed in 1804 by Congressman Daniel Crommelin Verplanck and his daughter, Mary Anna, our garden attracted many prominent visitors from the Hudson Valley and beyond for well over a century. Originally part of Mount Gulian’s vast estate and working farm, the garden comprised six acres, but later was reduced to four. In this space one would find fruit trees, vegetables, beans and flowers, formal boxwood beds, pergola structures, a sun dial and a running seasonal brook. Such an ornamental garden, featuring a flowering "English Boxwood Garden", was considered a necessity for wealthy New Yorkers, imitating the taste in European fashion at the time for fancy horticultural spaces with inviting walking paths and fountains.

Between 1829 and 1866, the property and ornamental garden were managed by James F. Brown, an escaped slave from Maryland who became a trusted employee of the Verplancks. In his journal, which he kept for 40 years, James recorded visitors to Mount Gulian, births and deaths, riots, epidemics, steamboat races and railway explosions, as well as many reports on weather, plantings and cultivation. He writes of taking the ferry to Newburgh to buy plants from the "father of landscape architecture" Andrew Jackson Downing’s nursery.

In 1880, Virginia Eliza Verplanck, wife of William Edward, assumed responsibility for the garden, which was well known in the area. Virginia was deeply aware of her family’s legacy. In her essay "The Verplanck Garden" she writes, "Our old garden has been a joy to the wives of the Verplancks since the beginning of the last century…Think how these masses of fraxinella have been blooming there since 1804! I feel as if I never could do them enough honor."

Virginia especially delighted in what had become an annual June event: taking lighted candles at night into the garden to light the fraxinella, commonly called the gasplant. She writes, "The flame leaps from blossom to blossom from the base to the point of the spike, leaving the flowers unharmed, for it is only a sticky oil exuding from the stalk which ignites."

The old-fashioned heritage roses, which had been in the garden for decades, received Virginia’s particular attention. The yellow Harrison rosebush, by her own account, measured 12 feet high and 23 feet in circumference. At one point, she counted 140 rose bushes in the garden. Like many gardeners of her day, Virginia shared her knowledge of gardening by writing books. In 1909 she wrote "A Year in My Garden" followed in 1913 by "Every Day in My Garden".

Following the 1931 fire, the garden sadly fell into total disrepair. The once-tended fields became filled with brush, sticker bushes and trees. Everything was taken over by vines. The Society was initially reluctant to take on a restoration project. However, in 1995, guided by a map from 1912 and Mrs. Verplanck’s books, volunteers braved the poison ivy and entered the overgrown area, determined to find the original ornamental flower garden. They walked over fallen trees, cut through the prolific akebia vines, and tried to avoid the stickers. Having found the location of the old garden’s well, they made an estimate as to where the entire garden was laid out. Mrs. Verplanck’s book was invaluable. She gave exact measurements as to the width of the outer gravel paths, the entire ornamental flower garden’s dimensions (50 feet by 50 feet) and the location of the well in relation to the pergola structure. The volunteers spotted nine upright posts in the woods, all wrapped with akebia. Incredibly, the posts turned out to be the remains of the original large pergola depicted on the map. The discovery of a local turtle sitting on the well-covering confirmed the location of the garden. 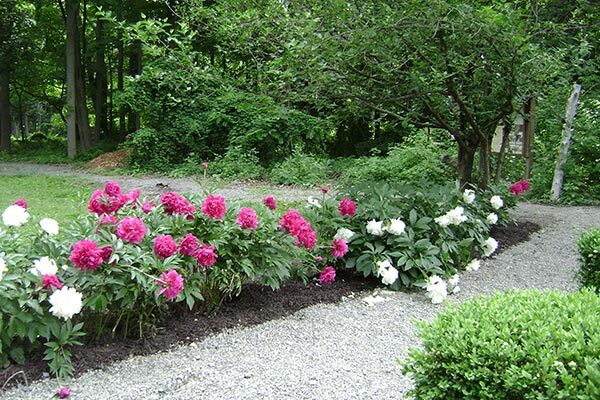 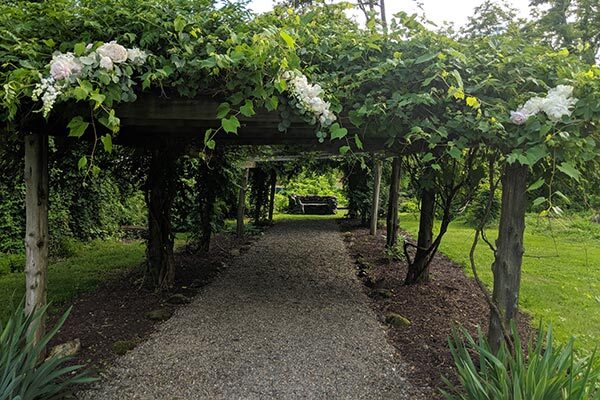 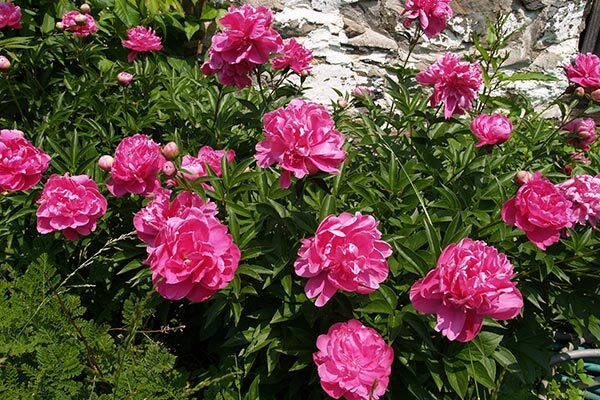 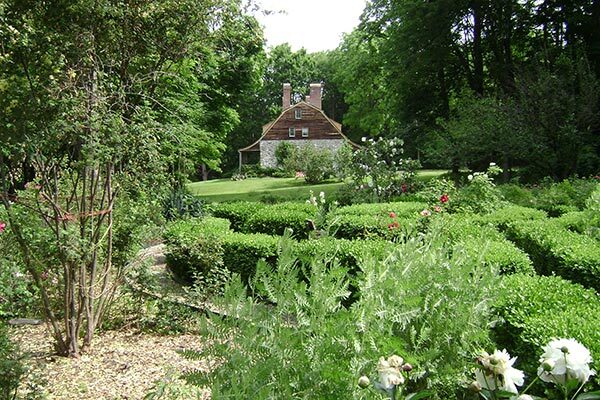 Progress has been made on the restoration of the formal garden since its uncovering. Sixty foot trees have been cut down, vines and tree stumps dug up, original paths outlining the garden discovered. Once the original garden was plotted, a supply of heritage flowers and boxwoods were planted, and the restored paths filled with fresh gravel. A gift of yuccas, roses, and peonies, all descending from original 1804 garden species, was made to Mount Gulian by Anne Durland, a direct Verplanck descendant. In the late 1950’s, years after the fire, Anne had made several trips to her grandmother’s garden, bringing back to her own home an array of plants that had survived and that she had been fortunate to discover. Anne returned these plants to Mount Gulian in the late 1990’s. They continue to flourish today in the restored garden, along with other heritage plantings. When visiting Mount Gulian, be sure to sit on the stone bench near the pergola, now draped with Catawba and Isabella grapes. Walk through our restored English Boxwood Garden. Take in the garden and the views, lovingly cared for by James F. Brown and the Verplanck women.